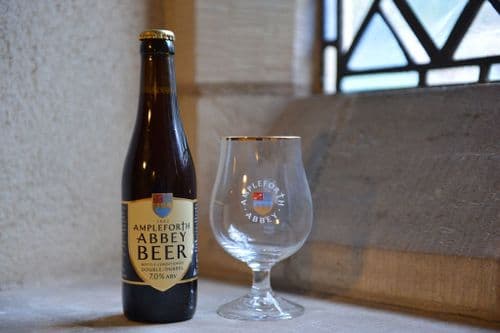 In 1608 a community of Benedictine monks fled England for the safety of France. Determined to make a living for themselves, they began brewing their native beer – ‘la biere anglaise’. It was made with hops and barley, then double fermented for strength and a ‘champagne-like’ sparkle.

In 1793, escaping the French Revolution, they fled back to England and eventually settled in at Ampleforth in 1802, and built the Abbey.  And today the beer, to a similar recipe, is being brewed and poured again with the monks of Ampleforth Abbey overseeing the brewing of the beer production by Little Valley Brewery, a regional Yorkshire brewery headed up by Wim van der Spek, a Dutchman who has a great knowledge and understanding of Trappist-style beers.

'Great example of what beer should be' Zak Avery, the beerboy.co.uk